The sultry sunshine in the coastal region with salty sea-breaze and summer sandy dust makes the atmosphere here very hot, stuffy, and people very dizzy. Images of Vietnam Night & Day Security blue shirts appear then disappear alternately under giant works like Duyen Hai Thermal Power Plant in the noon sunlight at 37oC for safety of security targets, making us really moved.
Welcoming us is the security chief Duong Van Nam – a 50 year old man with dark brown complexion and seasoned face, talking in the western accent mixed with khmer very sincerely, making a close impression on us at the first handshake. He confides: “the sunshine, dusty wind, and sand have tempered the skill and spirit of Night & Day Security guards in this coastal vietnam, guys”. With his sharing, we understand life of Security guards here more. With their daily duties, they men and women have to work fequently under high pressure, first to adapt with severe weather, then to do security tasks such as recording books, monitoring developments of the situation, keeping safety at security targets absolutely,… and also helping to do other necessary jobs at their targets in order to maintain workstyle, regulations and codes of conduct of Night & Day Professional Security.
Due to complexity at security targets, bad guys frequently mingle and disguise themselves as workers to come in to steal; there has been a case in which a crowd of gangsters rushed in to assault security guards in order to cause unsafety at security targets, to take advantage to steal. Moreover, due to competitiveness of the market, Night & Day Security guards have to frequently confront and do appropriate cultural acts, and show high professionalism in order to avoid disagreements with guards of other security companies who come to pick a quarrel to compete in the market. “Although such difficulty, we patiently hold out, overcome all obstacles to accomplish tasks, try best to build friendly, beautiful, professional images of Night & Day Security guards in the mind of customers”, says Mr Nam. 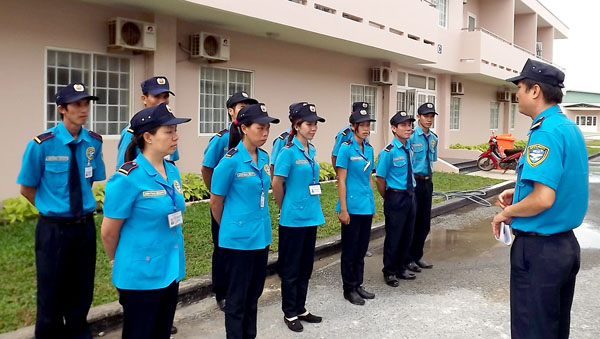 On-job training course of security skills by Night&Day Security in Tra Vinh
Walking around the security targets protected by Night & Day Security, we met Mr Tran Van Vinh – a guard protecting Telico target – a person who had just achieved a feat, catching a thief very rarely. He said that in the shift of the previous day, he saw a subject walking and looking around near his security position very doubtfully; because that guy did not break in the security target, he could not check or ask him/her to get away from the border. After 02 hours’ close watch, Mr Vinh found 02 thieves stealing into the next company and taking 02 oilcans of DO, and 02 remaining cans having not been brought out, then Mr Vinh shouted to coordinate with fellows to catch the thieves. However, due to taking charge in the official position while finding the case at the other company beyond the scope of Night & Day Security, Mr Vinh could not leave his position to catch the thieves. When coordinating with his fellows could be done, the thieves had dived to the sea,… However, the case had also been made in writing and the assets had been handed over to the lost party. “When the assets was returned to them, no one said anything; although they did not express thanks, I am very happy. Morever, encouraged by the security chief and brothers, I am happy enough”, said Mr Vinh.

Tran Van Vinh – A security guard finding the thieves for “the neighbour”
Returning to the dormitory for Gedi experts, we met security guards in class hours of regulations and codes of conduct. Taking advantage of rest time, we talked to female guards Truong Thi Bich Thuy and Bui Thi Qui, and knew that in addition to learning to improve security skills, they also learn more about Chinese to use in work communication. Ms Thuy said: “Good at security skills and able to communicate in language of customers, it is more favourable, I will try to learn hard to do it”. With our perception, we believe that these energetic western coastal girls can do what they want. 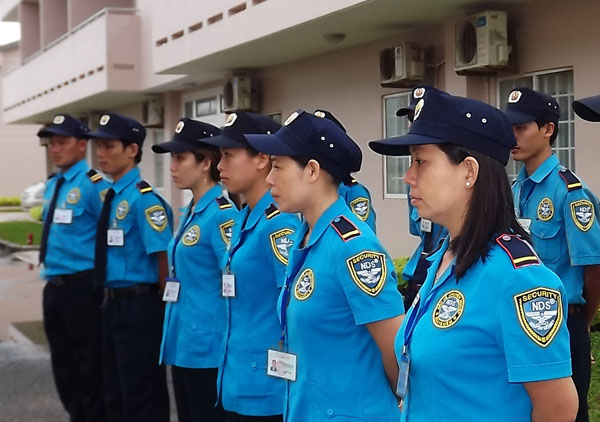 Truong Thi Thanh Thuy (right) at the training course of security skills
Different with Ms Thuy and Ms Qui, Shift-leader Le Van Vinh has a special feature, he is Khmer-Vietnamese, fluent in  two languages in Vietnamese and Cambodian. With a robust stature, tawny complexion and honest smile, Mr Vinh told us about his life, that of Night & Day Security guards at the security targets. For Night & Day Security, Vinh considers it as his second home, as for him, working in the good environment, having opportunities to promote and stable income, and especially working near his home, Vinh is wholehearted with his work. It is his effort that the  board of directors has appointed him a shift-leader at the security target.

Shift-Leader Le Van Vinh (first, left) at the training course of security skills
We regret that the time to contact security guards is too short, with the scope of this article we can not state all life and work of Night & Day Security at this severe-weathered but potential land. We believe that when works, factories are finished and put into operation, Night & Day Security force will grow more strongly and develop stably as its inherent value of trademark “Night & Day Security – Night Day Safe”.
Writen by Yphong - www.ndsvietnam.com 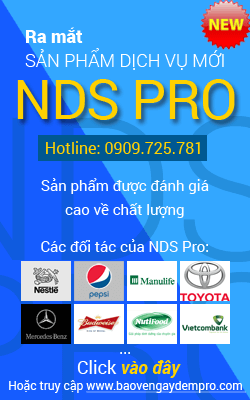 Ms. Dương - 0906 663 115
This email address is being protected from spambots. You need JavaScript enabled to view it.

Ms. Dung - 0903 640 064
This email address is being protected from spambots. You need JavaScript enabled to view it.

Mr. Lâm - 0906 937 276
This email address is being protected from spambots. You need JavaScript enabled to view it.

Ms. Liễu - 0909 298 628
This email address is being protected from spambots. You need JavaScript enabled to view it.

Ms. Tuyền - 0902 984 178
This email address is being protected from spambots. You need JavaScript enabled to view it.